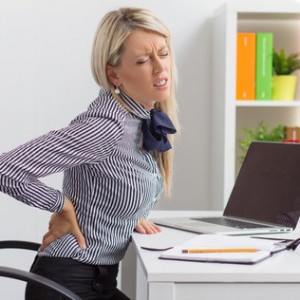 Much of today’s work takes place while sitting. Adults with an 8-hour workday often sit for at least 8 hours a day–perhaps even more if their evenings are spent watching television.

A 2010 study estimated that 70% of average adults spend their time being sedentary, while the remaining 30% engage only in light activity.

Extended periods of sedentary behavior are linked to a wide variety of health problems, including increased risk of cardiometabolic problems, such as elevated blood sugar, in both children and adults. This move towards a sedentary population has given rise to workplace interventions to encourage workers to get out of their office chairs.

We know that naps and occasional mornings of sleeping in can’t undo the damage from a chronic sleep deficit; similarly, research has found that bursts of activity (for example, being active only on weekends) do not counteract long periods of being sedentary. While getting some physical activity is better than none, the positive effects are ultimately outweighed by the negative effects of remaining sedentary for too long.

If increasing activity won’t counteract the effects of sedentary office work, what can be done?

Luckily, recent research has shown that the negative effects of sitting can be dramatically altered by even short interruptions:

Encouraging patients to move around, rather than simply stand up, is more strongly associated with improvements in cardiometabolic health. Brief periods of activity (like walking) improve markers of cardiometabolic health in children and both endothelial health and postprandial glycemia in adults, while simply standing up does not. One study showed that just 2 minutes of low-intensity walking for every 20 minutes of sitting improved glucose metabolism among overweight/obese adults.

Another recent study found that non-exercise associated thermogenesis (heat production) caused by the movements of fidgeting reduced the relationship between sedentary behavior and all causes of mortality. In a study of nearly 11,000 women, those who reported high levels of fidgeting did not have increased levels of mortality, even if the women sat for over 7 hours a day.

So, while it seems that you can’t make up for sitting all day at work by going for a run in the evening, just moving more at your desk or getting up and walking around periodically can improve health; proving that health interventions don’t need to be complicated or time-consuming!

Supporting the notion that movement, not just standing up, is responsible for the positive health effects of interrupting sitting, under-desk exercisers also seem to improve cardiometabolic health.

One recent study investigated the use of under-the-desk, stationary pedaling interventions:

In an era of sedentary work, talking with patients about simple ways they can change their daily habits can have profound effects on their health.

Emphasizing that the frequency of movement alters risks for metabolic syndrome, glucose regulation and overall cardiometabolic health, and explaining how little activity it takes to provide those benefits may provide just the incentive office workers need.