Written by Ted Zava – Republished with permission from ZRT Laboratory

In many cases the public water supply is safe, but there’s a hidden concern you need to know about: The immediate plumbing leading to drinking fountains, faucets, bathrooms, etc. in houses, apartments, schools, and workplaces could be leaching lead into the water. This can be caused by changes in water pH and temperature, additives, or the age and condition of pipes and connections.

Even though leaded gasoline, paint, and plumbing were phased out in the 1970s, they also will remain sources of lead exposure far into the future.

Children are Most at Risk

Recently, water testing in the Pacific Northwest revealed elevated levels of lead in public schools. Most schools built decades ago have ancient plumbing systems that are slowly poisoning those most susceptible to lead… CHILDREN.

This is not a localized problem, but a well understood and dangerous one across the U.S. and throughout the world. As individuals become more educated on the dangers of lead and sources of exposure, we can expect more stories to break that uncover hidden sources of lead and other toxic metals such as mercury, cadmium, and arsenic. Remember, the CDC has stated that there is no safe level of lead exposure for children.[1]

1) Childhood lead exposure is estimated to cause the US $61 billion in economic losses due to lead’s neurotoxic effects leading to a decreased intelligence quotient (IQ).[2]

2) Young children aged 1-5 years had average blood levels of 15 µg/dL in the 1970s, which dropped to 1.9 µg/dL in 1999, largely due to the ban on lead in gas, plumbing, and paint.[3] A blood lead level of 5 µg/dL is considered to be toxic for children.[4]Recent studies have shown that behavioral and neurological effects can occur at blood lead levels below 5 µg/dL.[5]

5) Blood transfusions can be a significant source of lead exposure in infants and young children.[8]

7) Lead in dust and dirt is a major source of exposure for young children that are learning to crawl or walk, as it is easily consumed or inhaled.[10]

8) Bone is the major target organ for lead, and because of continual bone remodeling during growth in children, lead is constantly being reintroduced into the bloodstream.[11]

9) Lead affects the development of a child’s brain and nervous system, putting them at greater risk than adults.[12]

10) Blood lead levels peak during dry, warmer periods of the year.[13] This is due to inhalation and ingestion of lead in dust originating primarily from prior use in gasoline. 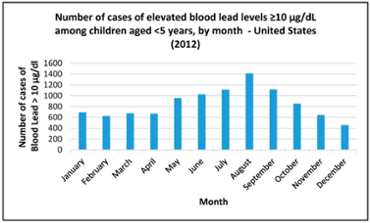 The half-life of lead in blood is 35 days, so it is important to test as soon as possible if you believe exposure has occurred.

Lead is a dangerous neurotoxin and a probable human carcinogen that is most detrimental to the developing brain and nervous system of a child. It is essential to detect exposure to lead and other toxic metals as soon as possible, as there is very little that can reverse the effects of long term heavy metal exposure.

Testing blood lead levels is the most accurate and common way to determine recent and past exposure in a child. The half-life of lead in blood is 35 days, so it is important to test as soon as possible if you believe exposure has occurred.[16] Once lead enters bone, its half-life is up to 30 years.

Test lead in whole blood, as testing serum or urine is not ideal. Almost all lead is attached to the hemoglobin in red blood cells.

Consider a simple finger-prick blood test that can be completed at home as an effective and less stressful alternative, especially for children.

The original blog can be found here.

Did You Know that Power2Practice Integrates With ZRT Laboratory?

Specialty laboratory tests are integral to personalized care, so Power2Practice’s business solutions platform and EMR was thoughtfully designed to integrate with both conventional and specialty laboratories such as ZRT, allowing you to spend less time on admin tasks and more time providing excellent care to your patients.

Watch this video and discover the uncommon EMR functionality, practice management and patient support tools that Power2Practice created to make your life easier.